It’s a dog-eat-locally-sourced-organic-sustainable-grass-fed-free-range-dog world in the natural foods business. After 20 years and three Jacksonville locations, Native Sun Natural Foods Market found itself in a crowded field and needed to find a clever way to differentiate itself.

The premium Jacksonville grocery chain needed to highlight its values, expertise, products, and services to help position Native Sun as a one-stop shop for a healthy lifestyle. Brunet-García delivered a brand awareness campaign around the theme of unexpected but relatable life situations that could inspire the target audience to “Go Native” for fresh, delicious, natural, and organic products for every diet and lifestyle.

“We didn’t want to speak only about onions and carrots; we wanted to communicate the freshness and values of Native Sun through great storytelling,” said Creative Director/VP Eduardo Sarmiento. “People want to know the story behind the product they are consuming—its values, its journey.”

When Native Sun first opened, it was Jacksonville’s only source for organic and natural foods. Today, those products are more accessible than ever, and Native Sun needed to cut through the clutter.

Account Managers Chad Villarroel and Kate Jolley orchestrated Brunet-García’s proven discovery process, which was the catalyst for the campaign. The agency assembled Native Sun’s leadership for a two-hour, interactive workshop to allow the team to listen. Gottlieb and his staff walked through the company’s values, its position in the marketplace, how Native Sun wants to be perceived by current and potential customers, and why capturing a unique target audience is critical for its business. 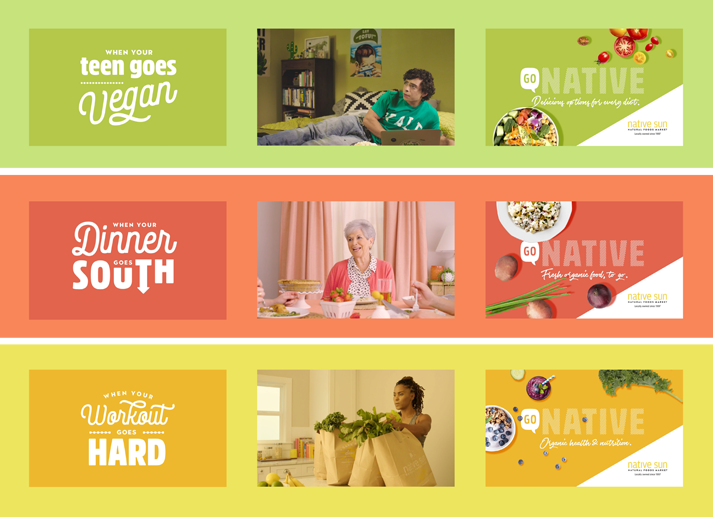 “Observing and listening to the client are keys to success when creating a campaign,” Sarmiento said. “The richness that came from those conversations impacted our view and motivated us to explore. They believe in their company, and so do we.”

“From this listening opportunity came the development of brand attributes and a message platform, a unique and engaging visual style, and an overall campaign that the client loved,” Villarroel said.

“We all fell in love with Native Sun and its mission,” Garrison said. “Their passion for building a superior customer experience felt like the right fit for our agency.”

“Native Sun’s super-talented team and insider knowledge of the business gave us the edge in building this campaign,” Garrison said. “We could feel confident that we could build a great design that their team could then execute well.”

“Our creative collaboration with the Native Sun team was exquisite,” Sarmiento said. “They brought knowledge about their brand and their industry, and we complemented that with our creative force, strategy, and production capabilities. We combined all of our strengths to create something stronger together.”

Brunet-García delivered a compelling campaign called “Go Native,” a series of fun and engaging situations people regularly face, such as a family dinner that doesn’t go as planned or parents coping with their teenager’s eating habits. The short-form narratives position Native Sun as the place to go when customers are in a pinch, celebrating a victory, or making a lifestyle change.

“The Brunet-García team approached this project in a unique manner that was a first for all of us,” Aaron Gottlieb said. “We have been in search of a talented marketing group who could collaborate with our internal team to create a message that was rich and had meaning rather than settling for marketing buzzwords. Once the two teams became one, meaningful work that delivered an accurate message emerged. We were excited to see the Brunet-García team open up to the collaboration because we have not seen this type of engagement with other agencies.”

The lighting gives the commercials a stylized look that still feels authentic. Each commercial represents one of the colors from Native Sun’s color palette. The campaign also played to Garrison’s affinity for typography, typesetting, and lettering.

“Katy’s art direction of the TV commercials transformed those rooms into beautiful and authentic spaces,” Sarmiento said. “Her type treatments on the print pieces were custom-made.”

In addition to three 15-second television spots, Brunet-García created a market analysis of the grocer’s three locations, designed print and digital ad templates, and helped the company identify media opportunities by writing and pitching stories that align with the campaign goals.

Castaño Group helped generate story ideas and served as Brunet-García’s production partner on the television spots, advising on which messages and situations could be effectively recorded. Castaño developed a shooting style that brought the stories to life while incorporating elements of humor and surprise. Early in the process, the team discussed how humor could be effective in relating Native Sun’s message.

“In an industry that is saturated with similar messages, we thought humor could highlight the great things Native Sun has to offer without being preachy or pretentious,” Garrison said.

“Human beings are more receptive to messages that provoke strong emotions through humor, nostalgia, or empathy,” Sarmiento said. “Some brands sound like technical manuals and condemn the audience to boredom. Creativity provides a window of attention and connectivity.”