Let me Telly You About Our Win

Home > Blog > Let me Telly You About Our Win

Brunet-García has earned five Tellys from the 38th Annual Telly Awards. The agency received two Silver Tellys and three Bronze Tellys this year, bringing the total to 26 for the Jacksonville, Florida-based advertising agency. 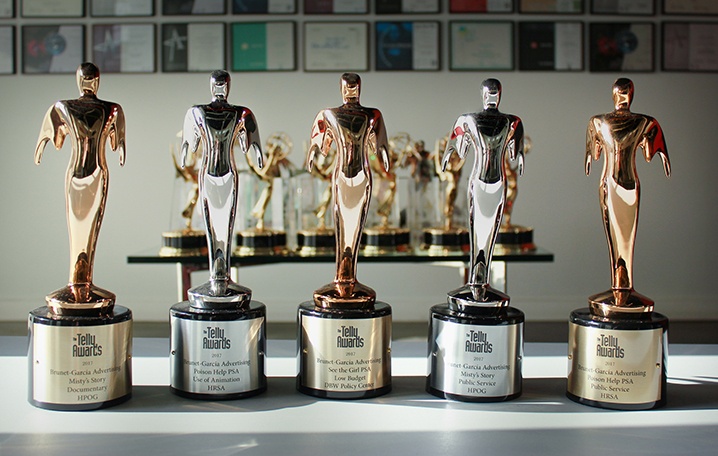 “The winning work is a snapshot of our diverse production projects over the past year—including animation, scripted commercial and live-action unscripted documentary work—for both local and national clients,” said Aerien Mull, Brunet-García associate creative director. “It’s always a pleasure to work on projects like these that allow us to truly partner with our clients to find innovative ways to share their story.”

A prestigious judging panel of more than 500 accomplished industry professionals, each a past winner of a Silver Telly and a member of The Silver Telly Council, judged the competition. The Silver Council evaluated entries to recognize distinction in creative work, entries do not compete against each other, rather entries are judged against a high standard of merit. Less than 10 percent of entries are chosen as Winners of the Silver Telly.

“Misty’s Story,” which received a Silver Telly in the PSA category and a Bronze Telly for Individual Documentary, tells the story of Misty Morgan who received healthcare career training and resources through Health Profession Opportunity Grants (HPOG) administered by the Administration for Children and Families, U.S. Department of Health & Human Services.

“Raising awareness for government programs and nonprofits like HPOG is already rewarding,” said Kate Jolley, Brunet-García senior account manager. “To be honored for our hard work is both an exciting and welcomed bonus.”

See the Girl received a Bronze Telly in the low budget category. See the Girl is a community engagement campaign built in collaboration with the Delores Barr Weaver Policy Center in Jacksonville, Florida. The Policy Center works to conduct research and evoke policy change to help young women facing incarceration and those who are already in the system. The video portrays real women assisted by Policy Center programs.

“The Telly Awards has a mission to honor the very best in film and video,” said Linda Day, executive director of the Telly Awards. “Brunet-García’s accomplishment illustrates their creativity, skill, and dedication to their craft and serves as a testament to great film and video production.”

Learn more about the Telly Awards and view all 2017 winners here.

The Telly Awards was founded in 1979 to honor excellence in local, regional and cable TV commercials. Non-broadcast video and TV program categories were soon added. Today, the Telly is one of the most sought-after awards by industry leaders, from large international firms to local production companies and ad agencies. With the quality of non-broadcast productions, traditional local & cable television commercials and programming on the rise, along with the world of online video continuing to rapidly evolve, we are excited to see this year’s class of entries.

Previous StoryB-I-N-G-O!
Next StoryHow You Can Prevent Disease For Yourself and Others