Creating the posters for the new season of Phase Eight Theater Company was Creative Director Eduardo Sarmiento’s first project at the agency. Art Director Bianca Borghi introduced him to the brand, the plays, and the previous materials Brunet-García developed for them. It was striking work: bold, memorable, fresh.

“Instantly, I saw a great opportunity to push further while embracing their essence,” Sarmiento said. “Building a brand is not a one night stand—that’s easy and lazy. Building a brand is about finding a clear voice and developing it organically, so it gets stronger and richer.”

For this project, Sarmiento wanted to create more powerful metaphors. As Alfredo Rostgaard, a famous Cuban designer, said, “a great poster should be like a punch in your eye.” Also, he wanted to honor Borghi’s vision while pushing her out of her comfort zone, “so we could achieve even more striking results and enjoy the collaboration.”

During the kick-off meeting with Phase Eight’s founder and artistic director, JaMario Stills, he shared a sentiment that sums up his vision for contemporary theater: “People want to see stuff that’s risqué.”

The pressure to develop a great poster for this season of Phase Eight performances was immense.

“It had to be striking, fresh, and impactful,“ Borghi said. “As a designer, this was a little bit daunting. After growing personally connected with the 2016 series, I had to step it up a notch to let this brand blossom into a bolder, more impactful version of itself.”

This was Borghi’s first opportunity to work closely with Sarmiento.

“His work is out of this world; he’s got an incredible ability to stop anyone in their tracks with conceptual images,” Borghi said. “I knew going into this project that working with him was going to be awesome … and challenging.”

The two worked together through several rough sketches.

“This is where I felt the most challenged, willing up a fantastic conceptual idea during a scheduled 9 to 5 timeframe is not always easy,” Borghi said. “I’m still trying to figure out some sort of ritualistic rain dance that will make the ideas come pouring in.”

For its second performance of the season, the company premieres “On Purpose,” a play written and performed by Jacksonville native Ebony Payne-English. In this coming-of-age story, she delivers a raw and provocative statement about fear, honesty, and success—all while facing an HIV diagnosis.

“On Purpose is not a tip-toe-around-the-truth kind of play,” Borghi said. “It’s a real story about a real woman who has HIV and how she’s empowered by embracing her diagnosis.”

During the sketching and brainstorming process, Sarmiento showed her a sketch of a uterus, and she immediately felt inspired.

“I went back to my computer to gather as many images of uteruses as I could,” Borghi said. “It didn’t take long before I started feeling really awkward about the fact that I’m looking up images of female genitalia in an open, collaborative-style office. ” 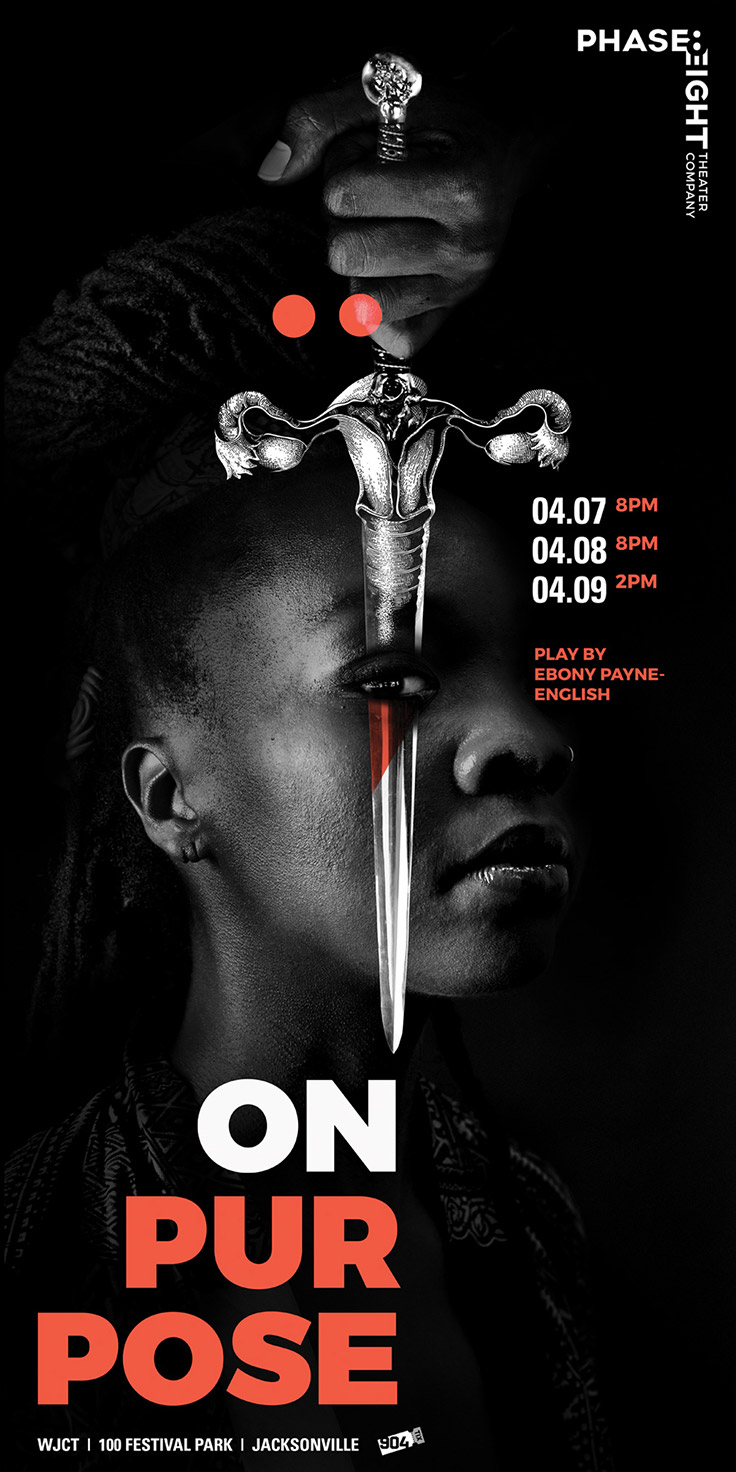 After a mock-up of the poster was approved, Payne-English agreed to sit for a portrait.

“We knew we would have to photograph her for this poster, and I was selfishly so glad I had the opportunity to spend an hour with her,” Borghi said. “She was sweet, polite, and gentle in her mannerisms and had a killer power glare at the shoot. Her fierceness was effortless to capture.”

After the photograph was shot, Borghi just needed to substitute the placeholder image with Payne-English. It was a perfect fit.

“We created a new poster series where the human face is presented as a scenic space, a place where identity and expressions are revealed,” Sarmiento said. “We hope you experience a sweet punch in your eye.”

Previous StoryOne small step for employees, one giant leap toward wellness
Next StoryWhat’s sociology got to do with it?